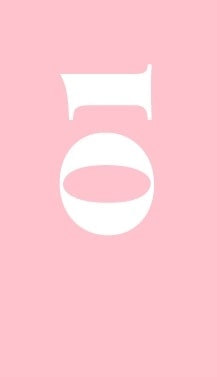 Showcasing the large scale installation named ‘paradox of female sexuality’ that I for my final exam at the Art-Academy (AKV St. Joost in Den Bosch, Netherlands).

“I can be working on a collection, an installation and a film at the same time. It can take a lot out of me, but the processes come from the same source.” 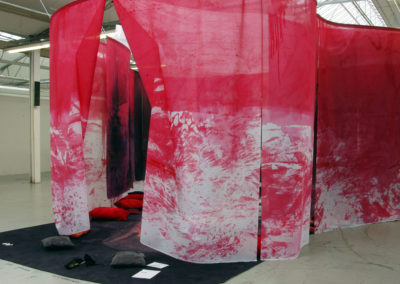 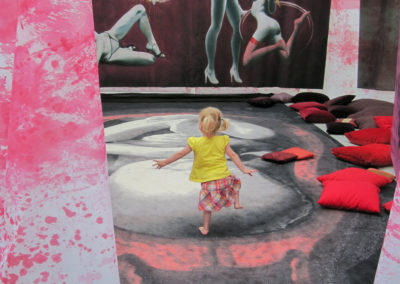 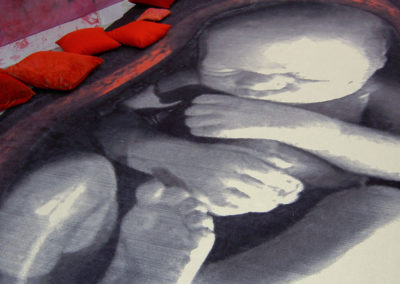 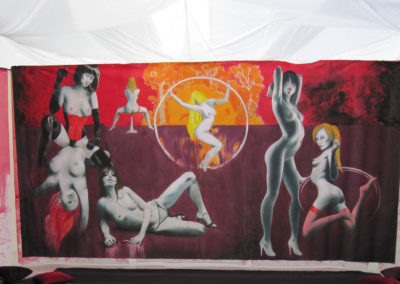 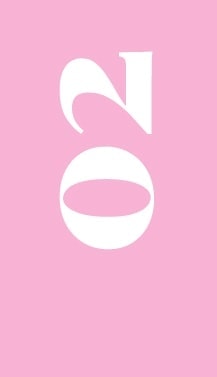 Video Installation with two experimental performance videos, titled: ‘beating’ & ‘feeding’. Both videos were created during my academic studies at the Academy of Fine Arts in Den Bosch (NL).

Studying art gives you the ultimate freedom to explore boundaries and push or break them. The institution and the space offered can empower you during your process to find your own voice. In my personal experience, art-professors on the other side either support your development. They see potential and try to help you lead your wild raw power into structured processes. OR they try to break you. Afraid of unconventional thought processes, or simply resulting from their own experiences as an artist.

“Art should disturb the comfortable and comfort the disturbed.”

We generate fears while we do nothing. We overcome these fears by taking action. With exploration, the goal is simply to find out more about an idea.

“If we go for the easy way, we never change.” – Marina Abramović

The video beating is an experimental performance-video which discusses the role and power-play of the two partners in a relationship -also in a same-sex relationship- in this case a relationship between two young CIS artists.
This video was mainly the idea of the male artist Paul van Sprundel, daring me to cross boundaries in an consensual setting of exploration.

The idea arose out of some kind of emergent love and my previous project about violence and victimhood.
I was interested in how people are able to violate one another and become an offender. After having researched this subject extensively, I wanted to find out for myself if I would be able to consciously inflict pain onto another human being.

I am interested in human behavior, especially the behavior of the people I love.

Furthermore, I myself wanted to explore who is the more dominant in a man-woman-relationship- and especially what are actually the facets of power and submission in any relationship? Aren’t we always also hurting each other in social relationships in one way or the other, voluntary or involuntary?

I’m the offender, the only rules were to only hit the body, not the face, when he would not stand up anymore it was over, and I wasn’t allowed to help him in any way. A special rule for the interaction of the clip was that there was no talking allowed. However, there was the possibility of nonverbal communication through body-language. The original beating lasted 38 min, which were cut into 9.07 min.
The straight cuts and noise enhance the graphic images of the beating.

Both videos belonged were part of the same installation. They belong together.

During the original installation, they were shown on two TV’s. One on one side of the otherwise dark room, the other on the opposite side. In the middle there was a bench. Sitting on it, one was able to see either one screen or turn around to see the other.

Interestingly, most people turned to the feeding video at the beginning more, probably because it was ‘less confronting’. But due to the sound of beating, most people instinctively turned toward the other screen when they heard the hits and mourning. Visible uncomfortable with either decision.

The video feeding is the second part of the installation and a performance-video which approaches the care towards another person up to the point of sacrificing oneself.

This video was mainly the idea of the female artist, me, wanting to discuss the unhealthy relationship patterns. Which hindsight I seemed to had developed in my twenties.

During the creation of this performance, I had the urge to represent my innermost feelings on the matter of romantic relationships. The loss of certain parts of oneself.

The woman eats and drinks, does not swallow, but instead gives the chewed food and wine to the other (the man). At the beginning, the viewer probably doesn’t immediately see what is happening. Then after a while it becomes obvious what’s happening, and the romantic setting also evokes the feeling of disgust.